The barber’s trade has a long history: razors have been found among relics of the Bronze Age (around 3500 BC) in Egypt. In ancient Egyptian culture, barbers were highly respected individuals. Priests and men of medicine are the earliest recorded examples of barbers.[1]Men in Ancient Greece would have their beards, hair, and fingernails trimmed and styled by the κουρεύς (cureus), in an agora (market place) which also served as a social gathering for debates and gossip.

Barbering was introduced to Rome by the Greek colonies in Sicily in 296 BC, and barber shops quickly became very popular centres for daily news and gossip. A morning visit to the tonsor became a part of the daily routine, as important as the visit to the public baths, and a young man’s first shave (tonsura) was considered an essential part of his coming of age ceremony. A few Roman tonsores became wealthy and influential, running shops that were favourite public locations of high society; however, most were simple tradesmen, who owned small storefronts or worked in the streets for low prices. 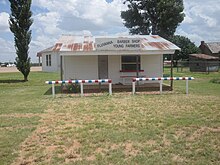 The barbershop in Fluvanna, Texas, has been restored as part of a pioneer village in Snyder in Scurry County in West Texas.

Starting from the Middle Ages, barbers often served as surgeons and dentists. In addition to haircutting, hairdressing, and shaving, barbers performed surgery, bloodletting and leeching, fire cupping, enemas, and the extraction of teeth; earning them the name “barber surgeons“. The barber pole, featuring red and white spiraling stripes, symbolized different aspects of the craft. Barber-surgeons began to form powerful guilds such as the Worshipful Company of Barbers in London. Barbers received higher pay than surgeons until surgeons were entered into British warships during naval wars. Some of the duties of the barber included neck manipulation, cleansing of ears and scalp, draining of boils, fistula and lancing of cysts with wicks.

There are no upcoming events at this time.